Yaounde, Cameroon-Thursday November 30, 2017- 8:50 PM Local Time (Cameroon News Agency)Under the instruction of the Head of State, the Minister Delegate at the Presidency of the Republic In-charge of Defense, Joseph Beti Assomo will on Friday December 1, 2017 preside over a special meeting in the Nations political capital, Yaounde to evaluate the security situation across the national territory, a communique from the Defense boss has revealed.
The meeting is holding after the killing of at least 6 soldiers in less than three days in Manyu Division of the South West Region of Cameroon.

On the night Tuesday November 28, 4 soldiers were attacked and killed by unknown individuals in Mamfe, the divisions headquarter and their weapons seized.
A similar attack in the Otu village near Cameroon’s border with Nigeria claimed the lives of at least 2 soldiers. 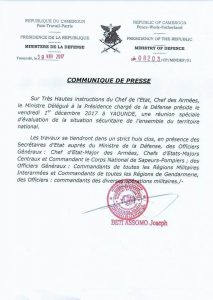 These persistent attacks on elements of the defense forces in the Anglophone regions comes just over a month after a security meeting in Buea chaired by MINDEF held on Oct 12.

Fridays behind closed door meeting will bring together authorities of the high command of the central and territorial defense and security forces.

Though nobody has claimed responsibility for the killings, the ADF, ‘Ambazonia Defense Force’ of Ayaba Cho, fighting for the liberation of former Southern Cameroon, has claimed on some occasions the killing of Gendarmes in the North West region, were orchestrated by his boys.