The Republican Guards In Gabon have demonstrated their love for their country and democratic principles by not announcing they are taking over power, but that a restoration council will be put in place to restore democracy and strong institutions which they say have been lost under Ali Bongo. In Cameroon, military for two years has been fighting a senseless war to protect a man who has been in power for 36 years, pundits hold that Gabon is indirectly telling Cameroon Soldiers to restore dignity in the country.

Early Monday at 4 am, Gabons Republican guards took over the National Radio to announce they have taken over power to restore democracy. They also announced the creation of a Restoration Council to that effect.

It was a Lieutenant of the Republican Guard, Lieutenant Ondo Obiang Kelly, who read the communique. He proclaims himself as “President of the Patriotic Movement of the young people of the defense and security forces of Gabon (MPJFDS). 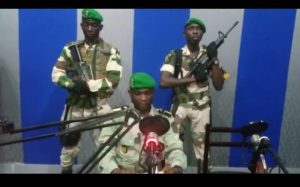 The military said Ali Bongo has lost mental and physical health and cannot rule Gabon. Gabon has lost it’s dignity” The spokesman said.The military putschists announced that they will set up in a few hours a “National Restoration Council”.

A former Commander of the republican Guard, General Ntumpa Lebani (who had been imprisoned in 2009 when Ali Bongo came to power) , was called to go to the National Assembly , the current president of the Senate , trade unionists, members of civil society, leaders of youth movements of opposition political parties, and even clergy. Several officials are expressly mentioned. The insurgents still call on the military to take control of the means of transport, ammunition reserves, airports.

Ali Bongo had with the help of the President of the Constitutional Council manipulated the constitution to maintain the Vice President as interim ruler whereas the texts indicates that a prolong stay of the President out of the country should be followed by the putting in place a transitional body before next elections.

By calling on all the youths to take to the streets and restore their democracy, the Gabonese Republic Guards are sending a strong message not only to Cameroon military, also to all and sundry. For two years now, soldiers have been fighting a senseless war against Anglophones, killing thousands just to protect the personal interest of Paul Biya who has refused to convene a meeting for an inclusive dialogue as suggested by the International Community.

Anglophone Cameroonians who picked up arms in self defense and frustration over the responds to their grievances, are gradually separating from Cameroon, tearing the “union” apart because of the greed and ego of Paul Biya who failed to listen to Lawyers and Teachers when they started the strike action in October 2016.

Is it time for Cameroonians to take their destinies into their hands?

EuroBoutique Rx, The Home Of Men's Clothing In USA