The death toll could rise according to reports. Two persons shot in Limbe in the South West region are now battling with their lives at the regional hospital in mile one.

In Buea one person was shot dead and youths paraded the streets with his corpse. One vehicle was set ablaze while the residence of the Mayor of Buea, Patrick Ekema was visited by some youths. They destroyed five of his vehicles, manhandled guards on duty and destroyed glasses of the house. The Mayor is accused to have shot one person dead, but he has refuted the allegation.

In Santa, North West region, one person is reported to have been killed by bullet after protesters clashed with security forces. 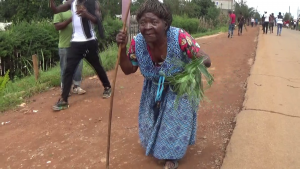 An Old Woman in Bamenda Joined the Peaceful Protest

Several persons were shot in Kumbo but reports of casualties yet to be independently verified by CNA.

The third victim is reported to have died in Mamfe, Manyu division in the south west.

There were other protests in Kumba,Tiko, Ekona, Muyuka, Ndu, Nkambe and other localities.

Thousands marched on streets demanding for the release of all Anglophones arrested within the context of the crisis. They were also singing freedom songs, calling the name of coffin revolutionist, Mancho Bibixy, incarcerated at the Kondengui prison.

The protests began around Ebonji, a village Kupe Muanenguba division before spreading to Konya,Ekona and others.

Boys of Ekona stormed the police station and mounted the “Ambazonia flag” chanting freedom songs; they also marched to Buea, Mutengene, Limbe and Tiko reinforcing the strike among the population.

Fridays protest though ended bloody was peculiar in the sense that several policemen and Gendarmes were just accompanying the protesters without shooting. Areas where gun shots were heard are said to have been tense.

The government has not reacted.