Bamenda,Cameroon-Thursday September 21, 2017-10:10 PM Local Time (Cameroon News Agency) The Senior Divisional Officer for Mezam in the North West region, Songa Pierre has instituted a curfew in his area of Command following an explosion of locally made explosives which wounded three Policemen.

The decision comes in a bit to quench rising use of explosives by unknown individuals.

Earlier the SDO Songa Pierre had banned all public gathering from this Thursday September 21st to October 3. The first person to suffer from this ban was Edith Kah Walla, National President of Cameroon Peoples Party, CPP, who had programmed a meeting in Bamenda. 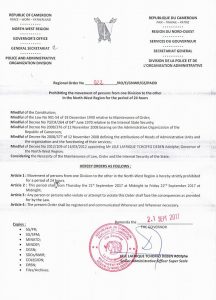 On his part the governor of North West region, Adolphe LELE L’Afrique has issued a release prohibiting movements from one division to another for the next 24 hours.

The night curfew in Bamenda will greatly affected night journeys, hence travel agencies that used to ply the road at night might have to reschedule their take off time.

This is the first time a curfew is instituted in Bamenda since the Anglophone crisis erupted.