As you enter into Buea, Fako division, the stench emanating from abandoned waste along the road and quarters hits your nostrils , driving you crazy to the extend that you’ll prefer  standing beside a pigsty than the decayed undisposed wastes fighting space with locals. Denizens are now paying the huge price, after Ambazonia fighters beat up some workers of the company in charge of collecting and disposing waste, HYSACAM, forcing them to go into premature Christmas holiday. 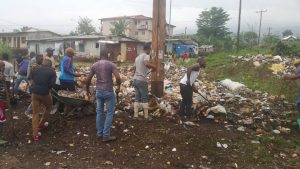 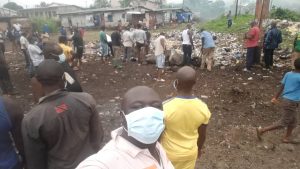 The HYSACAM workers were accused of covering military ‘atrocities’ by dumping unreported death cases around their dumping site in Musaka. Allegations they all refuted. Many of the workers have been hospitalized while others whose lives are on the balance have packed their bins from roadsides, leaving the locals to dump and dispose of waste products themselves.

It is against this backdrop that some youths in Street 2, Great Soppo in Buea, decided to dispose garbage and rubbish abandoned around the cemetery. Men from four quarters came out with hoes, spades, sticks and cutlasses to save their environment and their health, on a ghost town day in Buea. 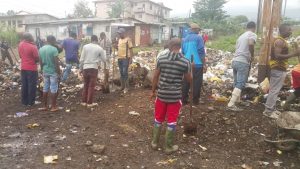 The irony here is that when the refuse will be disposed in a new site , it will still need huge machines to dispose them off the neighborhood because sooner or later the stench will creep from the bushes to the houses.

Locals say there is an urgent need to dialogue with the workers for things to come back to normalcy.

Discontinuation of 289 Cases In NW, SW: Presidential Decision Should Not Call For Jubilation- Barrister Tamfu Richard