Barrister Tamfu Richard, member of Nigerian and Cameroon bar associations, says the presidential decision announced by Secretary General at the Presidency, Ferdinand Ngoh Ngoh , discontinuing the cases of some 289 persons arrested within the context of the Anglophone crisis, does not concern cases of persons arrested and tried under the 2014 law on terrorism and for offences classified as felonies.

President Paul Biya wrote on Facebook Thursday December 13, 2018, “I have ordered the discontinuance of proceedings pending before the Military Tribunals against 289 detainees – arrested for misdemeanors, in connection with the crisis in the North-West and South-West Regions.”

The legal mind’s reaction came minutes after the State Media announced the Presidential order through a communique from the  Secretary General at the Presidency, Ngoh Ngoh.

He said, “This shouldn’t call for any jubilation because those arrested and charged under the 2014 terrorism law are standing trial for offenses classified in Cameroon as felonies and not misdemeanors.”

Barrister Tamfu Richard, who is part of the defense counsel of Ambazonia leaders standing trial at the Military court in Yaounde, said, ” I am afraid Sisiku Ayuktabe Julius and co won’t benefit from this. He should discontinue and release all those arrested within the context of the Anglophone crisis if we really want peace and normalcy to regain Cameroon. The Republic of Cameroon looses nothing in doing that.” 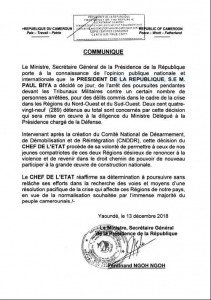 A misdemeanor is any “lesser” criminal act in some common law legal systems. Misdemeanors are generally punished less severely than felonies, but theoretically more so than administrative infractions and regulatory offences. Many misdemeanors are punished with monetary fines.

Offenses in Cameroon are classified under the sections 21 of the Penal Code as Felonies, Misdemeanors and Simple offenses. This comes few weeks after he created a committee to disarm Boko Haram and Ambazonia fighters but critics hold that he has instead put the cart before the horse.

The National Chairman of the Social democratic Front party, Ni John Fru Ndi has rubbished the decision, saying it will fail before it sees the light of day.

Opinion holds that a genuine dialogue before disarmament is paramount for the warring factions.

Decision Triggered by the US?

The US Deputy Permanent Representative to the United Nations, UN, Jonathan Cohen, on Thursday December 13, 2018 presented remarks at a UN Security Council briefing which stated clearly the position of the US.

The US has called the government of Cameroon to organize without pre-conditions a broad based dialogue between government and separatist leaders, as the only solution to the present impasse.

The US report to the United Nations, based on what members discussed at the Security Council, indicted both parties for committing crimes but called on the Biya regime to hasten peace process because time was running out.

Special Representative Fall and Director Ghelani, thank you for your briefings today. Your work is vital to a region facing a wide range of political, economic, and social challenges, particularly in Cameroon, on which I will focus my remarks.

The security and humanitarian conditions in Cameroon’s northwest and southwest regions have significantly deteriorated since the last UNOCA briefing to the Security Council in June. Violence continues to escalate, obstructing vital humanitarian aid delivery to over 430,000 IDPs and blocking health and education services to rural children.

Mr. President, October was the most violent month on record in Cameroon in recent years, and judging from anecdotal reports, we fear that November will surpass October as the bloodiest month on record. We don’t want to see that horrible trend continue again this month, December. The violence must stop now.

Violence between government and Anglophone separatists has resulted in killings and abductions of civilians, including a U.S. missionary who was killed on October 30. Faced with mounting insecurity, tens of thousands of Cameroonians have fled to neighboring Nigeria, as we’ve heard, while hundreds of thousands have been internally displaced and need humanitarian assistance.

The stakes in Cameroon are too high for this crisis to continue unaddressed. Cameroon remains an essential security partner in the fight against Boko Haram and the Islamic State in West Africa, including as a member of the Multi National Joint Task Force. The continuing crisis threatens to detract from our mutual security objectives in the Lake Chad Basin.

Mr. President, the United States calls for an immediate and broad-based reconciliatory dialogue, without pre-conditions, between the Government of Cameroon and separatists in the Northwest and Southwest Regions. We urge all sides to forswear violence, to restore peace, and to resolve their grievances through political dialogue.

Opinion: Disarmament Committee, 10 Points Why It's Another Misplaced Priority