The Head Coach of the National Football team, Hugo Broos has made public the names of 30 pre-selected players ahead of the Confederations Cup and block training for the 2019 AFCON qualifiers.

Rising star Clinton Njie who came into the limelight during the match Cameroon against DR Congo on September 6, 2014 in Lubumbashi, three years back , has been left out of the squad at the time when observers hold it would have been one of his major international competitions, the Confederation Cup programmed for Russia later this year. Though Clinton Njie is not in his best form, there are rumors that the incident in Gabon, where it is alleged he refused to greet Legendary Roger Milla, is still haunting him.

Among the players called up are 4 goal keepers, 10 attackers, 10 defenders and 6 mid fielders .They are all expected to show up at the training ground in Yaoundé on May 29. 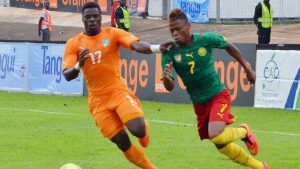