Members of the Board of World Association of Newspaper Publishers and News Publishers, WAN-IFRA, have called for the unconditional release of over  half a dozen Cameroonian Journalists arrested on the wake of crisis rocking the two English speaking regions of Cameroon. 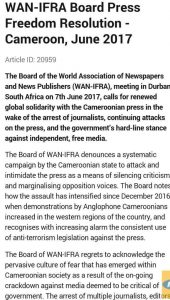 Meeting in Durban, South Africa recently in a board meeting, the members renewed global solidarity and condemned governments high hand stance on cracking down on the Press during this period.

WAN-IFRA denounced systematic campaign by the government of Cameroon to intimidate and attack the press as a means of silencing opposing and marginalized voices.

The board also denounced the use of terrorism legislation to try journalists to instill terror and fear among them.

Members of the Board of World Association of Newspaper Publishers and News Publishers have recommended on the international community to mount pressure on the Biya regime to free all those arrested. They also called don the government to allow the Committee to protect journalists enter Cameroon to investigate the matter, noting that since a correspondence on March 1,2017 to Communication Minister ,Issa Tchiroma Bakary there have been no reply.

Ayuktabe’s Call For Collaboration: We Shall Reconcile Within Interim Gov’t, Not Collaborate – Dr Samuel Sako