Douala, Cameroon-Wednesday December 20, 2017-4:00 PM Local Time (Cameroon News Agency) Relief supplies destined for Anglophones in Cross River State as refugees were blocked at the immigration and border post because several Anglophone bloggers and activists thought it was a government sponsored donation and claimed the relief supplies have been poisoned, CNA has learned.

CNA’s investigation revealed these donations to refugees were from Africa Now Foundation, which is owned by NJ Ayuk, a renowned business lawyer and CEO of Centurion Law Group, with offices in Cameroon, South Africa, Equatorial Guinea, Germany and several other locations.

He is an internationally recognized Oil and Gas lawyer, listed on the Forbes list of Top 10 Most Influential Persons in Africa. He is a strong supporter of the Anglophone struggle for Justice, Equality, Freedoms and Respect for Human Rights.

Ayuk NJ hails from Many Division and through his foundation has contributed greatly in community development programs, such as construction of hospitals, schools, town halls, and promoting football.

According to information gathered, Africa Now Foundation, obtained permission from the authorities to transport relief and aid supplies across the border and also for custom and immigration authorization to avoid taxes on humanitarian support, given the fact that Manyu Division is a war zone, the foundation requested protection from the local forces of order for its relief workers who were placing their lives at arms way.

Upon seeing a convoy of relief supplies guarded by forces of law and order, some separatist activists and bloggers were quick to conclude this was a government sponsored relief and alerted Nigerian immigration officers, saying foodstuffs have been poisoned. 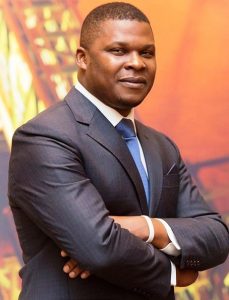 One of the core principles in an Anglo-Saxon culture is the respect for local community. The power of any so-called political movement is derived from the local community.

The power is built from bottom up and there must be respect. Like many, I have heard the calls for help and assistance over the past months as the current crisis has grown.

Therefore, the current bickering over the supply of food and humanitarian work to Anglophone refugees and to our family’s needs to stop. When lies and misrepresentation take over any legitimate struggle, you undermine the credible issues on the table and you also disenfranchise your own. Let me be clear, no one group of people has a monopoly over Manyu.

This is my home, this is where my ancestors died, and I have every right to continue a proud tradition of Manyu people. We must not pass over our responsibilities to others. We must do what is required to assist our people.

I understand the climate and the politics. I am not ignorant to it but I expect both government and the activist to use fair-minded words when they talk about our chiefs and our people. Poisoned food????? I don’t think I should dignify that with a response. You lose your credibility when you engage in frivolous accusations.

How do you want Manyu people to support your struggle when you accuse their children of providing poisonous food to their people. Watch your language else you will lose a lot of people who care and are concerned. We have a good organization in Africa Now that is doing a lot of work in many countries and the communities they work with are thankful. When we decide that we want to channel support from our partners into our own community, a debate starts and stupidity takes over. No one questioned the millions we spent on scholarships, football, women in business, hospital support, refurbishing of town halls and other community projects in Manyu.

We have done this without making any noise or seeking a single dollar from any Cameroonian, or the Anglophone community. Let’s not forget, a lot of us lead comfortable lives outside Manyu.

Many in Manyu are dead or hospitalized with accurate figures underreported. We sing and dance to the death of security officials. Do we keep a tally on the number of civilians that have been killed or injured? What have we become as a community?

These families deserve our respect, our sympathy, our quiet gratitude. More critically, they deserve the time and space to deal with the unspeakable grief and sorrow they now endure, as well as every ounce of support that can be mustered to help them through it.

Those of us left untouched by this kind of loss are in no position to judge or even comprehend how they will best do this. We may stake no claim to representing, advocating or otherwise holding forth about the grieving process. There are experts, chiefs, clergy and loved ones who can manage this far better than the rest of us.

But we can and we should, as a community, endeavor to honour and help comfort the families of the fallen and those displaced. Manyu never knew refugees. We only saw grainy photos of refugees on TV from Liberia, Sierra Leone etc. Now we are refugees.

We are the only refugees in the Anglophone crisis. We are scarred, and it will take decades for these families to feel whole again. The work starts now. It starts today. Stop talking and criticizing others. Do something. Do it today. Some community leaders are trying to do that and I will always offer my support.

That’s the right thing to do. I have seen the effects of war. I have worked with the UN and seen what war can do to destroy a proud community. The Government or the Governor gave no supplies to Africa Now foundation. I have never met the Governor. If I see him on the street I wouldn’t even recognize him and vice versa. Permission was sought from government to ensure that relief workers were protected. That’s the right thing to do and I owe no one an apology for trying to protect the lives of our people and those who are putting their lives in harm’s way to support our people.

Dealing with the symptoms of the crisis, in some ways, is the easy bit. But ultimately, there are no humanitarian solutions to humanitarian crises, only political ones. Humanitarian actions like that Africa Now Foundation intend to do, can assuage some of the misery, but it takes politics to stop the killing of civilians and security forces. Civilian protection inside Manyu is non-existent. It is driving retribution and sectarianism, and driving people out of the country. This is the truth. The politics of war and peace, and the mechanics of aid, live in separate policy boxes. But for the Manyu people who are on the receiving end, they are inseparable.

If everyone who reads our reporting, who likes it, helps fund it, our future would be much more secure. For as little as £1, you can support Cameroon News Agency on mobile money or call the number for details +237 679 700 696 – and it only takes a minute. Thank you.
Related Story
Spread the love
0 5 minutes read
Facebook Twitter LinkedIn Pinterest WhatsApp
Show More
Share
Facebook Twitter LinkedIn Pinterest WhatsApp Share via Email Print