The corpse removal takes place this Thursday from the General Hospital in Yaoundé at 9 am before departure to the University of Yaoundé 1 for Academic honors. The convoy will then head to Douala where traditional rites are expected to be performed at the Mukanda, Palce Dika Akwa.

According to the program, the corpse will be taken to Buea in the South West region, at his GRA residence where he will be laid in state around 7 pm local time.

Professor Gottlieb Lobe Monekosso was born on 13 November 1928. He spoke English, French and functional Spanish. He was also fluent in his mother tongue, Douala, and Yoruba.

He attended Methodist Primary and Secondary schools in Lagos, Nigeria. He then proceeded to the United Kingdom where he studied medicine at Guy’s Hospital Medical School; he distinguished himself by winning the University of London Sanderson-Wells Prize for Nutrition in 1951.

Upon graduation, he obtained House appointments at Guy’s Hospital and later went on to the University College Hospital, Ibadan, in 1954 as Medical Registrar. He returned to the U.K. in 1956 and obtained higher qualifications: the membership of the Royal College of Physicians of Edinburgh, the postgraduate degree of Doctor of Medicine of London and the Diploma in Tropical Medicine and Hygiene, all in 1957.

He was appointed Senior Registrar in Medicine at Ibadan (1957-1958), then Lecturer in Clinical Medicine at Makerere College and Mulago Hospital in Kampala (Uganda). He undertook research in the Department of Medicine, University of the West Indies, Mona, Jamaica during 1959. He subsequently became Senior Lecturer and Associate Professor at the University of Ibadan (1960-1963).

He was Professor and Head of the Department of Medicine at the University of Lagos (1963-1968). There he built a modern department with all the major system specialties whilst he himself established a community-based teaching and research project in neighbouring rural and urban centres.

In 1968, he became founding Dean of the Faculty of Medicine of the University of Dar-es-Salaam on a WHO assignment, and after two academic years, he returned home at the request of the Cameroon Government and gave up his WHO post to become founding Dean and Director of the University Centre for Health Sciences (CUSS) at Yaounde, Cameroon. He remained there for ten years. It is during this period that he devoted himself to teaching, health care and research in community medicine, and gained valuable experience in the coordination of multi-donor inputs (WHO, UNDP, Canada, USA, France, U.K., etc).

He returned to WHO as a Consultant in WHO Headquarters (1979-1980). During this period, he carried out assignments in South East Asia and the Western Pacific as part of a review of thirty years experience of health manpower development. He then served in the Region of the Americas as PAHO/WHO Representative in Jamaica, covering some northern Caribbean territories.

He returned to Africa after his election to the post of Regional Director.

Professor Monekosso undertook a wide range of international assignments in all the regions of the world for a period of 30 years. In Africa, he participated in the growth of medical education, medical practice and medical research notably in Nigeria, Cameroon and Tanzania; but also in Niger, Zaire, Uganda, and Zambia. He was also involved in projects in Ghana, Sierra Leone, Liberia, Ethiopia and Congo. He was a member of the Association of Physicians of East Africa and Foundation Secretary of the Association of Physicians of West Africa. He was President of the Association of Medical Schools in Africa. He was foundation Chairman of the AFRO/WHO Advisory Committee for Medical Research.

International activities outside Africa included Foundation Secretary of the World Federation of Neurology (elected in Buenos Aires in 1962), Rockefeller Foundation, Fellow to the USA and Brazil (1965) in Tropical Medicine, International conferences in Japan, Europe, and North Americas, signatory of the convention establishing the World Federation of Medical Education and Chairman of its planning committee. He was a member of a UNESCO Panel on the Equivalence of Qualifications, a member of a special panel of the World Bank (to the McNamara) on Education worldwide, and member of a special panel on the role of the Bank in the health sector.

Professor Monekosso’s career took him from his home in a small African village near Douala, Cameroon, through most of the African countries and in a number of countries in all the regions of the world. He became over the years an internationalist who worked harmoniously with professionals, scientists and politicians from several horizons. His work covered a wide span and he moved easily to and from fundamental biomedical science and technology, through clinical medical practice, to epidemiology, and public health practice. Professionally, he evolved from clinical neurology through medicine to clinical epidemiology.

Through his career, Professor Monekosso combined field work with communities, the training of medical students and other health professionals, as well as health clinical, laboratory or epidemiological. In later years, much of his time was devoted to managerial functions.

He took over as Regional Director for Africa on 1st February 1985. He was already familiar with the Office having participated in its reorganization as an Adviser to his predecessor, Dr. Quenum as from 1966. He took an active part in several aspects of the work of WHO/AFRO over a twenty year period and contributed to its growth. It was, therefore, possible for him to successfully reorganize the African Regional Office of WHO within a few months and set the framework in collaboration with experts and ministers of the Region, to chart a new accelerated path to health development in Africa with primary health care as a support to economic development at the district level.

Professor Monekosso received a number of awards and decorations, notably:

Elected to the Fellowship of the Royal College of Physicians of Edinburgh, 1966

Organization of multi-professional teaching, research and services institutions in Tanzania and Cameroon with medical, nursing, technical and auxiliary students at Muhimbili and CUSS and community health units in rural areas in both countries.

Reorganization of institutions into three fundamental divisions (Biomedical, Clinical and Public Health Sciences) in both Tanzania and Cameroon.

Organization of integrated/coordinated teaching programmes for medical studies with a balanced participation of the three divisions or technical units.

Responsibility for the construction and equipment (in Cameroon) of multi-purpose teaching and research laboratories for students and staff ; as well as of a University Medical Centre modelled on a District Community Hospital geared for teaching, service and research in community medicine.

Responsibility for the design and implementation of field activities including experimental primary health care services in villages, community health surveys, community health research (including, applied biomedical and health services research by staff and students on major health   problems in all the provinces of Cameroon – over 150 theses and dissertations were produced between 1975 and 1978), and the design and implementation of student health team projects in rural areas, as well as special four-month integrated medicine internship in rural district hospitals.

Participation in many World Health Organization and other international activities including Chairmanship of the Regional Advisory Committee for Medical Research.

Awarded the Degree of Doctor of Science (Honoris Causa) by the University of Ife for outstanding biomedical research on the tropical neuropathies and for contributions to medical education (1976). 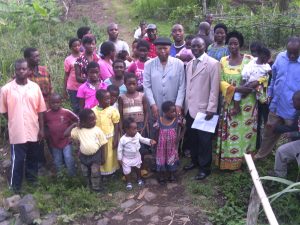 WHO Seminar for Teachers of Public Health, Brazzaville, October, 1969.

Meeting of Deans/Heads of Schools and Departments of Public Health, Interregional meeting Manila, 1976.

Planning of University Centre of Health Sciences, Republic of Niger, 1972, 1973.

Organization of three seminar workshops on training, service and research in primary health care in Africa.

WHO Study Group on “The Application of Advances in Neuro-sciences for the Control of Neurological Disorders”, Abidjan, Ivory Coast 1977.

The role of the first line hospital in the local health services system.

Washington and Jamaica; preparation of a plan of work for a PAHO/WHO Health Development Team.

Various meetings of WHO/TDR Research Strengthening Group, 1978-1985 and Executive Sub-group of the RSG

EXPERIENCE WITH OTHER INTENATIONAL AGENCIES

-Representative of Cameroon on Health Committee, 1971/72

Travelling Fellowship to some Educational and Medical Research Institutions in the United States and Brazil, 1965

Survey of Teaching and Research in African Medical Schools in July/August, 1974

Member of a special commission on higher education (equivalence of degrees) in Africa, 1974/76

Member of Commission on higher education and social change. Meetings in Yaounde and

Special Panel on Education, 1978, appointed by Mr McNamara (meetings in Washington and travel in different regions of the World)

Association of Medical Schools in Africa

Annual meetings in many medical centres from 1963-73

Secretary, International Commission for Research in Tropical Neurology appointed in Buenos Aires 1961, from 1961 to 1966

Member working party and signatory of constitution of the World Federations – as Representative of the Association of Medical Schools in Africa. (Mainz, Germany; Copenhagen, Denmark)

– Research on the epidemiology of Jamaica Neuropathic syndromes

– Research on Endemic diseases and nutrition

– Professor and Head of Department of Medicine.

2) Organization of community teaching and research projects in several rural areas of Cameroon, 1972-79

4) Organization of an integrated Health Sciences Centres for training of MD.s and other health team members,

8) Member of the Advisory Council of the National Medical Research Institute, 1974-78

9) Management of multi-donor UCHS Project with financing and staff members supported by UNDP, WHO, FAC, USAID; CIDA, and equipment/consultants by UNICEF, ODM(UK). Responsibility for coordinating the inputs of these various agencies for both technical assistance and capital development. All projects were completed on schedule and national counterparts took over schedules after 7 years.

9 AM: Removal from the Yaoundé General Hospital mortuary

10 AM: Academic Honours at University of Yaounde I

9 AM: Reception by Southwest Doctors at Buea Regional Hospital

4.30 PM: Reception at ‘Court a Pongo’ by Paramount Chief