In an interview with Cameroon News Agency, the Interim Head of Billing and Marketing Division, Port Authority of Douala, Ndive Mulongo, said it was necessary to introduce new tariffs because the old ones which have been in force for the past 18 years can hardly meet up with the rude competition in the market today.

Ndive Mulongo: Yes thank you for coming, the new tariffs systems applicable to the services rendered by the Port Authority of Douala were operational since the first of January 2018. The measure motivated the urgency to improve the quality of service requested by stakeholders in the port community. Furthermore, to meet the investment requirements of the port community and removal of scrap vessels at the port of Douala and Bonaberi.

The old tariffs were put in place since 22 December 1999. Eighteen years after, the economic context in which they were instituted is not the same. Today the competitive and regulatory landscape in the port and shipping industry has changed drastically with the introduction of the International Ship and Port Safety (ISPS) Code, and deregulation that has rendered the industry more competitive.

The above investment had drastically; 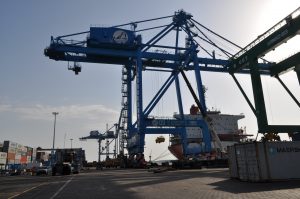 3rd Quay MachineCNA: How are these tariffs applied in Port operations, what has changed in terms of services offered to ships, goods, port land and others?

Ndive Mulongo: The port authority of Douala is operating a combination of multipurpose and specialized terminals designed and operated to achieve overall efficiency. Generally, tariffs are applied at

three levels in port operations.  site involves ship to quay loading and offloading operations.Yard system which consists of cargo storage, stacking, transfer, and distribution. Finally, gate operations which are designated to efficiently control access into and out of the port.

Except for the tariffs for the use of the channel and vessel waiting time at the quay which saw a slight review, that for services rendered to vessel remain unchanged.

Tariffs on goods have not changed, however, to provide adequate security on goods and in responding to customer demands. A tax on security was introduced to provide state of the art modern video surveillance cameras at the port authority to reduce pilferage at its lowest ebb.

Port land and other port installations :

These tariffs were reviewed based on the demand equilibrium and the prevailing economic environment. However, this increase is also to discourage unscrupulous operators who use the port as a storage site and to support PAD’s repairs, rehabilitation, and investment in roads, drainages, diverse network etc.

The tariff for access into the port equally saw an upward review to dissuade people who constitute safety danger into the port domain.

CNA: What added value is the Port Authority of Douala expecting from the implementation of the new tariffs?

Ndive Mulongo: The port Authority of Douala expects the most appropriate customer service level that gives the customer the maximum value added. The services PAD renders to ships would help ships to reduce aspects of operational efficiency and turnaround time. Also, customers will benefit in a cost-effective way as the vessel waiting time at the quay will drastically reduce.

The provision of video surveillance to both goods and vessels will contribute greatly in creating value added to navigation and security of goods.

The Port Authority of Douala given its strategic location at the Gulf of Guinea remains a good location for value-added logistic activities such as bulk breaking, and consolidation of cargo destine to neighboring countries like Chad and CRA.

CNA: How has the port community welcomed the new tariffs applicable to services provided by the Port Authority of Douala in force since January 1, 2018?

Dieudonné Onana Ndoh: Allow me to indicate that the Port Community is not surprised by those tariffs, because we have participated to their elaboration. It all started during the 32th edition of the board of our Community.

The way to raise that new income is the revision of tariffs and we participated to the process of that revision.

CNA: But it is alleged that some operators are reluctant to adopt the new tariffs.  Did you consult with other stakeholders to measure the impact of this decision before adopting the new rates?

Dieudonné Onana Ndoh: I have told you that the port community was associated to the process.  All the stakeholders are represented in the port community and in other concentration groups. Therefore those operators were informed. I wish to give an advice to shippers. A port is not a place where goods should stay for more than 14 days after their arrival otherwise they face penalties.

CNA: What is the impact of this decision on port activities?

Dieudonné Onana Ndoh: We are expecting that the implementation of those new tariffs allow the Port to ameliorate the services offered to the Port Community. Remember that we have expressed our whishes to the Port as the modernization projects are concerned. We will follow and make sure those projects are realized.

CNA: What is the Port Community doing to get stakeholders wholly understand the new tariffs systems?

Dieudonné Onana Ndoh: The sensitization campaign will continue. We have advised some corporations to sensitize their members and to acquire many copies of the new tariffs for their members.

The Iya Foundation Brings Hope to Dialysis Patients In Buea