Catholic Bishops have met in an extraordinary meeting at the head office of the National Episcopal Conference in Yaounde in the case of deceased His Lordship Benoit Balla, concluding that he was brutally assassinated, a release from the Bishops read.

In a strongly worded communiqué the Bishops called on the Cameroon government to make sure investigations are thoroughly carried out and culprits tried according to the law. 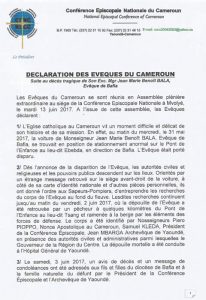 They also asked the government to take its responsibility seriously by securing the lives of its citizens and clergy men in particular.

The bishops have expressed fears the Roman Catholic Church in Cameroon is undergoing tough times and that if nothing is done such killings might continue to take centre stage. 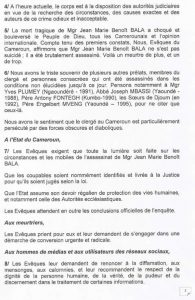 In the same release, they asked the culprits to make a radical and urgent repentance before God.

They also said social media users should be careful by avoiding defamation, lies telling and the non respect of human dignity.

One Person Dies,Others Injured In Ghastly Accident Along Muea-Ekona Road