Yaounde-Cameroon- Monday March 5, 2018 – 8:00 PM Local Time (Cameroon News Agency) The World Health Organisation, WHO ,  has donated a total of 150 Paediatric wheelchairs to the Ministries of  Public Health and Social Affairs. The event which took place on March 01, 2018 at the Ministry of Public Health in the Nations Political capital, was graced with the presence of the WHO representative to Cameroon, Dr. Jean Baptiste Roungou, the Minister of Social Affairs, the Israeli Ambassador to Cameroon, and other dignitaries, under the auspices of the Minister of Public Health, Andre Mama Fouda.

According to Dr. Roungou, this donation from WHO aims at improving child health, a public health concern in Cameroon, which is registered under the working strategies, policies and plan of partners, and institutions present at the event.

This outreach focuses on relieving those suffering of their needs because there are many handicapped kids in and out of hospital or social institutions who lack Paediatric wheelchairs for their movement.

These wheelchairs are allocated for the Ministry of Social Affairs, the Chantal Biya Foundation, two General hospitals, one regional hospital, Laquintinie hospital in Douala and four  District hospitals.

According to the Minister of Public Health, Andre MAMA Fouda, these wheelchairs are to be distributed in eight regions through the National Rehabilitation Centre For Disabled Persons.

This falls within the framework of the close collaboration between the Ministries of Public Health and Social Affairs to take care of vulnerable people. He further stated that his ministry will ensure these health facilities make good use of the wheelchairs. 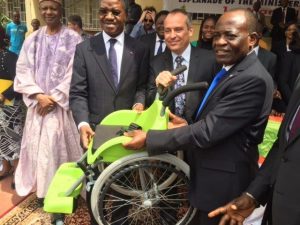 A significant part of the activities of the 2017/2035 health sector strategy of the Ministry of Public Health and its PNDS (National Sanitary Development Plan), the Ministry of Social Affairs 2018 road-map, the 2017-2020 WHO/Cameroon cooperation strategy and the Israeli Embassy to Cameroon cooperation program, focus on the health of the population.

In his address, the WHO representative, Dr. Jean Baptiste Roungou talked about the inauguration of the neonatal branch of the Bafia hospital wherein 10 Paediatric wheelchairs were donated last month. According to him, the wheelchairs  are now a prestigious means of transporting young patients within the hospital. This innovation has thus helped to stop the practice of carrying these kids on one’s back or arms over long distances, he said.

Presently, the major concern of this hospital remains the state of the tires of these wheelchairs which will be forced to wear out due to the bad state of the roads.

Dr. Jean Baptiste Roungou said the event was an opportunity to celebrate the lives of thousands of kids which will be saved thanks to the provision of the wheelchairs and thereby enabling them to maybe become the future Nelson Mandela, Barack Obama, Einstein, Martin Luther King, Alexander Fleming or Mahatma Gandhi.

He concluded by acknowledging the efforts of the Israeli Ambassador who inspired WHO to acquire  Paediatric wheelchairs and who personally ensured their transportation from Israel to Cameroon.

Shake Up at UBA: UBA Cameroon Gets New MD