The workshop according to the Publisher of CNA, NFOR Hanson NCHANJI, was timely because Journalists especially Anglophone Journalists are constantly on the ground to cove the Anglophone crisis which is escalating to an uncontrollable violence in the two English speaking regions, “When I was trained as a trainer by the CCMN-Cameroon, with experts from the PCC Peace Office, I said to myself that this is exactly what we need. I saw the need for trained Journalists to differentiate themselves from Citizen Journalists by implementing the principles of peace journalism in their daily reports. By this I mean, they need to be proactive in examining causes of conflicts and looking for ways to encourage dialogue before violence occur, they have to carefully choose and analyze the words they use, understanding that carelessly selected words are often inflammatory. ” He said. 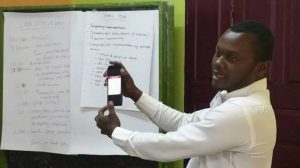 At the workshop was a special guest and facilitator, international peace crusader and President of the Cameroon Bar General Assembly, Ntumfor Barrister Nico Halle. As a peace crusader and nation builder, he said because the media is very powerful in the society, practitioners need to know the importance of preaching peace because they hold the peace of the society in their hands. Barrister Nico Halle said peace is the product of love which is the greatest commandment in the bible. He told the over 20 participants that where there is no peace exist nowhere with injustice, hence for peace to exist, there must be love, justice, equity and the rule of the law. 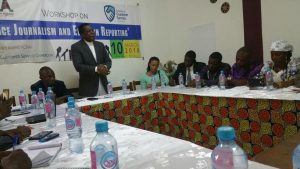 Barrister Nico Halle also advised Journalists to have a legal view of events before reporting because it might land them in trouble if found wanting adding that if they know reporting will aggravate a situation, they should not report the event.His wish was that peace returns to Cameroon when justice must have been given the pride of place.

The second session of the work held in Douala Four Council area, Bonaberie, was handled by the Publisher of The Advocate Newspaper who was trained alongside Nfor Hanson Nchanji as facilitators by the PCC Peace Office, Tarhyang Tabe, was essentially on election reporting.

Participants were able to carry out group works on how to plan a coverage for elections in their different organs with emphasis laid on; checklist for election coverage, how to detect irregularities, how to plan for coverage, security measures among others. 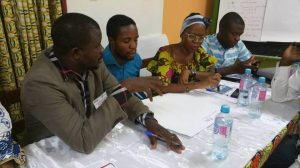 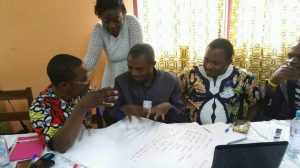 The session ended with ways to mitigate conflicts between groups by a journalists, connecting peace Journalism and Electoral Journalism with Nfor Hanson Nchanji as facilitator. He urged journalists not to avoid portraying races as only between two candidates but should give voices to multiple candidates, to avoid airing comments and reports that encourage tribalism and divisions within the society, avoid unbalanced stories and avoid letting candidate use journalists for their propaganda.

A participant, Innocent Azeh of Equinoxe Radio and Television said, “If I was a paramount ruler, I would have decorated Nfor Hanson Nchanji with a red feather for what he has done. I am overjoyed after the more than enough knowledge I have acquired today. I feel overloaded as I have added another chapter in my career. I carried an empty bucket to the stream and the stream didn’t fail me, I had it filled.”

Another participant, Ajara Ali from DBS Television, said “I learnt a lot, thanks for the good organization the knowledge. I was a pleasure and I hope to use the skills ahead of upcoming elections. 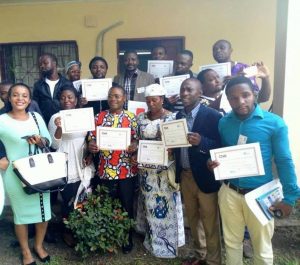 At the end of the workshop, participants were awarded certificates of participation with the Publisher of CNA, Nfor Hanson Nchanji noting that the workshop is just the beginning of good things coming to change the media landscape and give it a more professional touch in Anglophone Cameroon.

This is the second workshop organized by the award winning CNA in its one year existence since April last year. It falls in line with one of its objectives; training to empower Journalists thus empowering the world.

Anglophone Crisis : Ban on Circulation Of Bikes Extended To Ndian, Kumba, Others