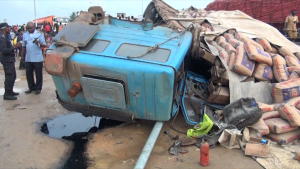 The intensity of the shock was hard and the front view of the taxi was completely shattered. Onlookers reveal the driver of the taxi was on high speed around 5:30 AM when he met face-ti-face with an oncoming heavy duty Truck transporting Cement. 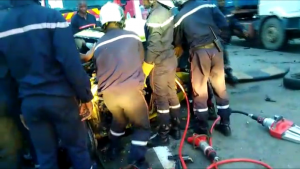 The driver died on the spot including one lady who was crossing the road, her baby was saved.

Three other persons in the taxi were only retrieved from the shattered vehicle after intensive works by fire fighters. The deceased victims were taken to the Tergal and Military mortuaries while the injured were taken to hospital.

* If everyone who reads our reporting, who likes it, helps fund it, our future would be much more secure. For as little as £1, you can support Cameroon News Agency on mobile money or call the number for details +237 679 700 696 – and it only takes a minute. Thank you.