BANGEM, Cameroon-Sunday April 29, 2018-4:00 PM Local Time (Cameroon News Agency) It was no ordinary day like others for both the people of Nninong Clan and local administrators. If the people were happy to finally see a new ruler after close to a decade, local administrators were busy mapping out strategies to brave the bad roads and security challenges from Bangem to Nninong, knowing that Ambazonia fighters could strike at any point. That is why before the arrival of the SDO, Keyantio Augustine, two military vehicles patrolled the Clan about two hours to the event.

They were no ordinary military vehicles, one had a machine gun attached to it with combat ready soldiers while another transported men dressed in mufti and ready for any eventuality.

Before their patrol around 11 am Saturday April 28, 2018, I am reliably told one hour before, some young men identified as Ambazonia fighters had also arrived the ceremonial ground to see what was happening, but they could not be identified by bystanders, only few people knew who they were and where they were up to. 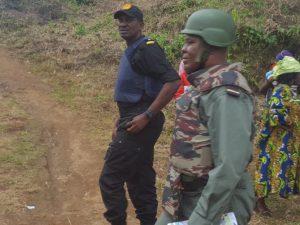 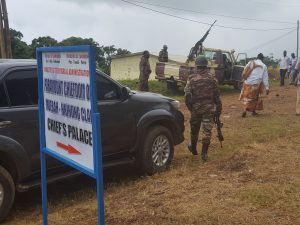 As the people from the 10 villages that make up the Nninong Clan, gathered, waiting on the SDO to arrive, about 9 Soldiers stormed the ceremonial ground armed to the level of their teeth. They surrounded the area while four stood where the SDO was supposed to sit. Shortly after, Keyantio Augustine accompanied by the Divisional Officer for Bangem arrived, heavily guarded to their seats.

At that moment everywhere was calm, it was unprecedented and unheard of that at the heart of the Anglophone crisis and kidnapping of local administrators by Ambazonia fighters, the SDO and his team passed 8 villages without any attack.

While Installing the new paramount ruler of the Nninong clan, HRH Ekwelle Emmanuel Makoge, the SDO, Keyantio Augustine used the occasion to remind him that the Division was undergoing security challenges, hence he should collaborate with administration to sensitize the villagers to denounce violence wherever it is coming from; the SDO intentionally or unintentionally did not use the words secessionists, terrorists or Ambazonia fighters.

The SDO also urged him to encourage education among his people especially the girl child. He told them that education is the fundamental prerequisite to success. 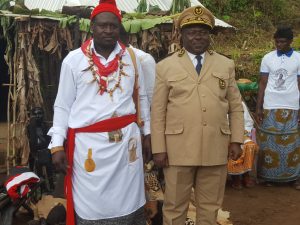 On economic and development domain, Mr Keyantio enjoined elites to put hands together, support their chief in his endeavors and push the clan forward, make it best in Bangem.

Responding to an earlier plight by the Chairman of the Nninong traditional council to the government to upgrade the Clans status to a first class Chiefdom, the SDO said the file will be forwarded to hierarchy.

The new Paramount ruler of the Nninong Clan, HRH Ekwelle Emmanuel Makoge, an offshore expert by profession, said his enthronement was the dawn of a new era and that the new era can only be good if the people rally behind him. 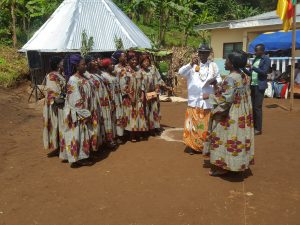 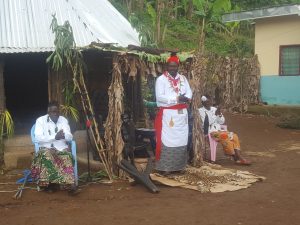 In an interview with CNA, he said, “No development can be achieved without the collective efforts of all. I am calling on the young, old, men and women, boys and girls to come together and build our cherished Clan. Let there be unity and peace; I incarnate that peace and unity and my role here is to work with them as the torch bearer. However we are pleading on the government to understand with us when we say this Chiefdom is the oldest in Bakossi land, we want go back to our First Class status.”

Asked whether he was not afraid of the security challenges and the fact that chiefs tagged as “betrayers” by Ambazonia fighters have been beheaded, the level headed Chief said his role is simple, transmit messages from villagers to administration and vice versa. He said his main aim is to see peace reign in the clan and that everyone should enjoy equal justice, equity and rule of the law.

He said after his enthronement, he will organize a meeting with the people and hear from them what their problems are for onward transmission to the administration.

Referring to Ambazonia fighters, he said, “Personally, I do not know the people you are talking about but one thing I know is that they need their messages just like all villagers to be transmitted to the government, I think they personally know which chief is doing what. Government also needs to know what the people want, that is why I am here. They are all my subjects and I intercede for all.”

I was told by some villagers that as the ceremony was ongoing, some Ambazonia fighters were there keenly following the speeches and activities.

I got curious to know why they were so kind not to attack the SDO’s convoy, a man they claim to hate and want his head. I was told that the Ambazonia boys strongly encourage Chiefs to rule their people hence they wanted the installation to take place hitch free. Another hint reached me that a deal had been reached between organizers and the fighters, I cannot independently confirm that.

Could it be the heavy artillery brought by the military that scared them? This was a rhetorical question anyway.

The Nninong Clan and Chiefs

Bangem council area consists of sixty–three (63) villages belonging to eight clans: the Bangem, Nninong, Muambong, Nhia, Elung, Ebamut and Muatan clans. The council area is inhabited by mainly the Bakossi tribe, all of whom share the same ancestor as descendants of Ngoe who was married to Sumediang and they had seven sons. They lived in Mwekan, about 10Km from Bangem in the western part of the Muanenguba Mountain.

Bangem – formerly part of the Kumba Eastern Area Federation (Kumba North) – became a Sub-Divisional Headquarter in the 1953, incorporating all of Bakossi (in the western aspects of the Kupe and Muanenguba mountains. In 1968 Bangem was split into Bangem (Northern Bakossi) and Tombel (Southern Bakossi) (Ejedepang-Koge, 1986) and subsequently achieved Divisional Headquarter (Kupe Muanenguba) status in the 1993.In 1963, the Bangem District was created covering the land occupied by the Bakossi people. Bangem District was split into Northern and Southern districts in 1968, and, in 1977, the Bakossi Council was also split into Northern and Southern councils.

Nninong therefore existed before the annexation of Cameroon by the Germans in 1884.

The first German Governor, Von Zimmerer visited Nninong in 1891 and handed the German flag a symbol of rulership to the first Chief, HRH Ebah Makoge who ruled from 1895-1916 and died.

He was succeeded by Edie Makoge Ngwese who ruled just for one year from 1950-1951.